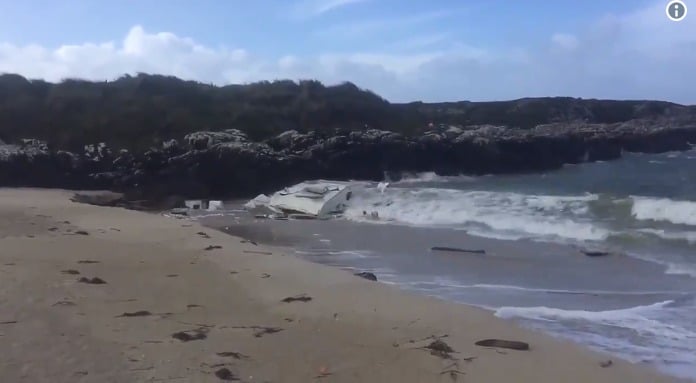 A woman tragically died this morning after her caravan was blown off a cliff edge in County Galway.

The emergency services attended the scene at about 7.45am today at Claddaghduff.

According to reports, the woman in her 50s was sleeping in her caravan when it was forced off the cliff edge by severe gusts of wind.

After a search was carried out, a Garda spokesman announced that the woman’s body was recovered on Acton Beach.

Her body has since been taken to the nearby University Hospital Galway for a post-mortem examination.

Ireland’s President, Michael D Higgins, expressed his condolences to the woman and also to her family.

In a statement, he said:

“I am deeply saddened to learn that Storm Ali has already claimed one victim today. I would take this opportunity to pay tribute to all those in statutory and voluntary organisations around the country, who are helping and stand ready to assist their fellow citizens, and who are working to maintain essential services around the country”.

The scene of this morning’s fatality at Claddaghduff, outside Clifden. More on @rtenews pic.twitter.com/BuvSBFCUDT

The severe weather has caused famous tourist attractions such as The Cliffs of Moher to be closed. The famous Clare cliffs were off bounds for all visitors until 1 pm today. The official website said, “Please do not visit the site as conditions are unsafe.”

Forecasters warned yesterday and earlier this morning that Storm Ali is set to bring “severe and possibly damaging gusts of up to 130km/h” to some areas of the country.

Incredible Footage Emerges of The Largest Human Shamrock EVER (WATCH)