Irish dance trio ‘Freedom’ will blow you away…

This Irish Dance video will leave you gob-smacked.

Over our time, we have seen some remarkable Irish dance videos, but this is definitely up there and could well be the best yet.

The video which is an Irish dance by a group called Freedom and has taken the internet by storm. 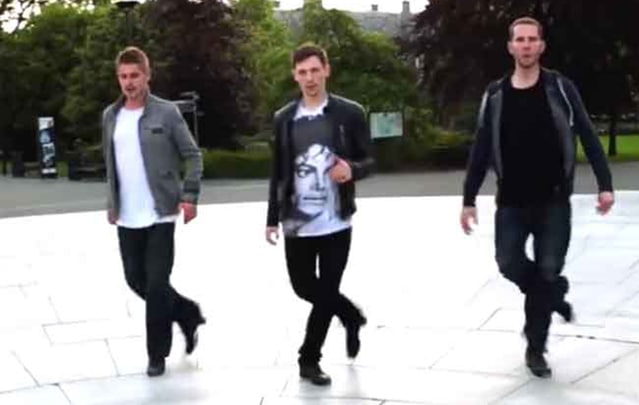 We are sure that these three Irish dancers are going to be absolute icons if this video and dance is anything to go by.

Filmed at University College Cork, the remarkable video (created by Brian Doherty) will amaze you.

The short sequence of Irish dancing is made more powerful with the background speech given by Charlie Chaplin in The Great Dictator and the music Mind of a Beast by The Glitch Mob.

While the Irish dancers admit that it can be an extremely competitive industry, they hope that “Freedom” shows what can be done if Irish dance companies collaborate and help each other to move forward.

The video has already hit over 422,993 views after he posted it on YouTube.

Galway man, Kieran Hardiman, who is the lead dancer in Ireland’s Celtic Steps show and has previously performed with Riverdance, collaborated with fellow performers Alan Kenefick and Ciaran Plummer to show off their spectacular dance skills.

Kieran started dancing at the age of nine for the Costello O’Brien School in Galway, Ireland. He has competed in every major championship, winning the Connaught and All Scotland Championships before placing third in the world.

In Kieran’s professional career he has performed with over 12 different shows touring in over 40 countries. During this time, he has performed on BBC’s The Alan Titchmarsh Show, RTE’s The Late Late Show, BBC’s Proms in the Park, and UNICEF’s Cinema for Peace.

He has also danced for the President of Ireland and the Empress of Japan. Kieran first joined Riverdance in 2007 and is delighted to dance the lead role in Dublin.

Irish dance or Irish dancing is a group of traditional dance forms originating from Ireland, encompassing dancing both solo and in groups, and dancing for social, competitive, and performance purposes.

It originated from the 18th century, and in that time, this video is undoubtedly one of Irish dances best videos.

Cavan man sells his own Grandmother on the Black Market