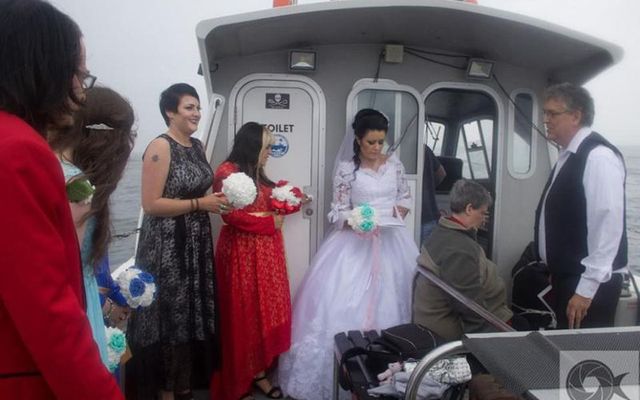 Hopefully, no arguments come back to haunt her!

Introducing Amanda Sparrow Large Teague, the Irish woman who has sensationally married the ghost of a 300-year-old Haitian pirate.

Co. Louth woman Amanda Sparrow’s story went viral in early 2018 when her spiritual marriage to a 300-year-old Haitian pirate named Jack Teague sparked the imagination of everyone who came across her story.

The 45-year-old first met Jack in 2014 when she felt his presence in her bedroom and as their friendship strengthened, it turned more romantic, with Amanda eventually telling her pirate partner that she needed some kind of commitment if their sexual relationship was going to continue.

Jack and Amanda then agreed to get married and so the pair took to the high seas to get hitched in international waters with the help of a medium.

But how exactly does a marriage with a ghost work? How can you communicate, how can you feel their presence, and how can you get more intimate? Amanda explains all in the video below:

Meet the Woman Who Married a Ghost Pirate

"There is no more evidence to support god's existence than there is my ghost pirate husband's existence."Forget ghosting, meet the woman who has passed up mortal men to marry an actual 300 year old ghost.

Ireland is known for its drinking culture, and the way in which we consume alcohol most-commonly is in the pub, bar or club over...
Read more
Craic

One good thing about being Irish is our ability to tell stories and to laugh at ourselves. Perhaps the tendency not to take life too...
Read more