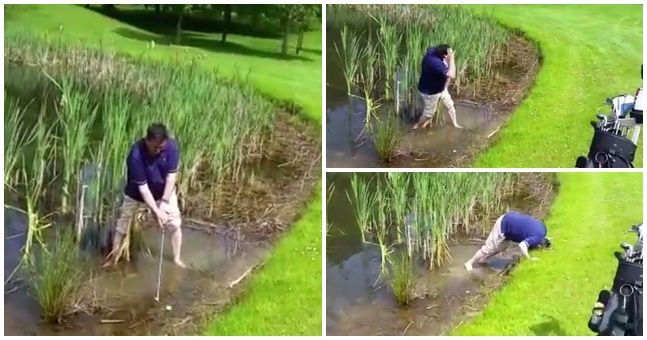 The video has left people all over the world in stitches.

Esker Hills in Offaly, the club where the great Shane Lowry learned his game, is the place where the most hilarious golf shot of the year was filmed.

The video, filmed by Damian Morrissey, shows a man who got into some bother in a water hazard while playing a round of golf with his friends.

With the ball looing like it was still playable, Damian’s friend pulled a Jean de Velde and removed his shoes and socks, rolled up his trouser legs and waded into the water in an effort to pull off an epic escape.

Unfortunately, the shot didn’t turn out as expected and it resulted in one of the funniest viral videos you’ll ever see.

The description of the video from Youtube: “Jean Van De Velde impression goes badly wrong at Esker Hills GC 28 May 2017. Just 3 friends playing the first round of the year on a sunny Sunday morning. My ball went in the water, but I could see that about 1/2 of it was above the surface so I did a Jean Van de Velde and took off the shoes and socks, rolled up the trousers and decided to have a go. My friend asked if he could film it as he reckoned I would get destroyed with water and mud etc. The outcome was rather more dramatic. Plan was to play it like a bunker shot, and hit about an inch behind the ball – that didn’t work out so well, club bounced off the water and hooked over my left shoulder into the middle of the lake. We laughed so hard we had to let the group behind us play through. And of course without my sand wedge I hit every bunker possible on the way back.”

The video has now racked up over 1 Million views and everyone is loving it!…