It’s safe to say that Conor McGregor is unlike many human beings on the planet, but to many in his home nation, he is just a hard-working man who dared to dream. While the globe has been fascinated with his bravado attitude, quick wit, bulletproof will and astute business mentality; Irish people have been given a boost of confidence knowing one of their own has gained world domination with a tricolour-draped round his back. Here are five reasons of how Conor McGregor is drastically changing the image of Irish men around the world. 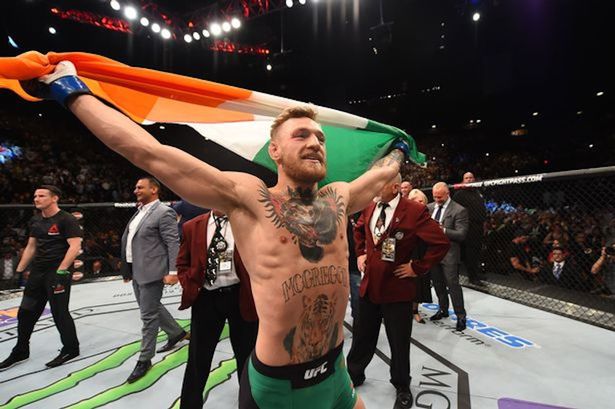 Conor has often spoken of his modest upbringing as a child while also receiving the social welfare check throughout his time as an upcoming MMA fighter. His last welfare cheque was used to survive during his days in Sweden before his first official UFC debut. Although conor was appreciative, he certainly did not need another help in hand after his quick dismissal of Marcus Brimage. With a first round TKO, he earned a $60,000 ‘performance of the night’ bonus and was in seemingly upbeat form when speaking about his new riches. All Irish men in times of financial worry should know that one of the world’s wealthiest sports stars was broke no less than five years ago.

Although the champ often displays a cold and vicious demeanour to his opponents, this was not always the case. Featured in the video below, Conor talks about the stressful times as a child during his commute to school where he would regularly receive threats by gangs. When times were at their worst, a young Conor would carry a dumb bell in his schoolbag to defend himself if the group ever decided to attack. Most will know of the trauma, and long-term effect bullying can have on a person, and it is an inspiration that Conor now acts as a beacon of hope to young men going through the same.

3. Applies The Law of Attraction

Many Irish men are perhaps not known for their self-motivational proclaimed abilities; humble and modest but at times maybe lack the will to fulfil their full potential. Conor McGregor is a keen advocate of a top selling book ‘The Law of Attraction’, texts that boast about inner peace, self-confidence and motivation. The Irish megastar has been captured various times reiterating that once he says he will do something, he will achieve it; a subtle translation of the book’s core message, ‘ask the universe for something and you shall receive it’. Had it not been for this mentality, Conor would certainly not be where he is today.

There is no doubt that Conor McGregor’s style outside the octagon has been as influential as it has inside it. The superstar is regularly dressed by Hollywood’s top tailor, David August who has fitted suits for a host of global stars including actor, Robert Downey JR. The Irishman is never shy to flaunt his array of his pricey silk shirts on his social media pages, paying homage to some of the top designers in the world, most notably his love for Louis Vitton. The sports star has also received awards for ‘Ireland’s Best Dressed Male’ at Ireland’s VIP awards, not something you would associate with a cage fighter.

Although the UFC double-champ has a taste for expensive suits, fast cars and luxurious mansions, he also takes the time to give back to those who have been with him from the start. Not only has Conor looked after his close family but has also helped fund many new SBG MMA gyms around Ireland. Conor began his journey in much more humbling surroundings, he and his long-term coach, John Kavanagh fought out of SBG’s first location; a cold and damp concrete box with no heating, situated on the outskirts of Dublin. The gym then moved to a mega facility in Dublin Concorde, funded by both Conor and Kavanagh after a series of profitable wins in the UFC. Since then, SBG has opened facilities all over Ireland part financed by the Irish men while also giving senior management/coaching roles to his core team-mates who have been with the star since the beginning. A critical reminder to always remember where you came from!

Amazon has announced the launch of a new High Protein Food selection in Ireland. The…