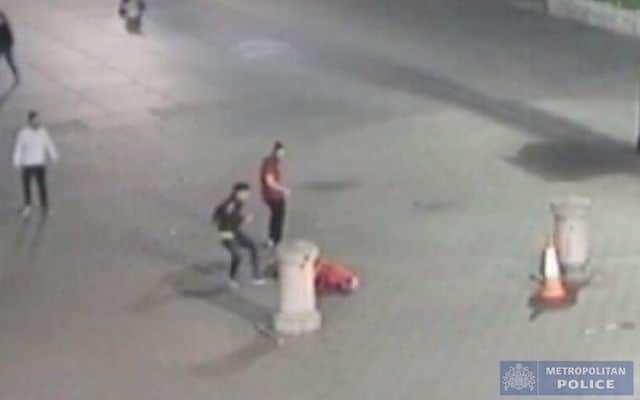 WARNING! You may find this video distressing.

CCTV footage of a savage attack which left Irishman Desmond O’Beirne dead after one punch has been released by Scotland Yard in the hope of finding a lead.

The dramatic footage of the Irishman’s last moments are shown in the video just before he was knocked unconscious by a single punch and then kicked on the ground has been released by London police.

Desmond O’Beirne from Ireland was attacked in Trafalgar Square after a night out on June 2, 2017. He was left in a vegetative state and died five days before Christmas. No one has yet been arrested

The CCTV shows a man delivering a blow to the head of O’Beirne who falls while another man rushes in to kick him.

Police are offering a £20,000 reward after a man was murdered with a fatal punch in Trafalgar Square. Desmond O’Beirne’s family asked that CCTV of the attack was released to help find those responsible. More here https://t.co/EOLKsxKNx4 pic.twitter.com/PAHaOEiNa8

Scotland Yard is offering a £20,000 reward for information on the killers. Detective Constable Noel McHugh said: “Someone might see this video and remember that they witnessed this incident; you will see a female who is clearly shocked by what has happened and holds her hands up to her face.

“You may have been part of the group and did not realize how seriously Desmond was hurt and that he has now died. That may prey on your mind.

“You can contact us and help us get justice. Desmond was an inoffensive man, a big man and character, who was out having a drink. The CCTV shows that he was senselessly attacked, and he never stood a chance.”

If you can information about this, please contact British Police.

The top 5 Guinness adverts of all time

Ireland’s Cheesiest Busker Will Leave You In Stitches! (VIDEO)

Hilarious Joke: An Englishman, a Welshman and an Irishman were at a theme park…