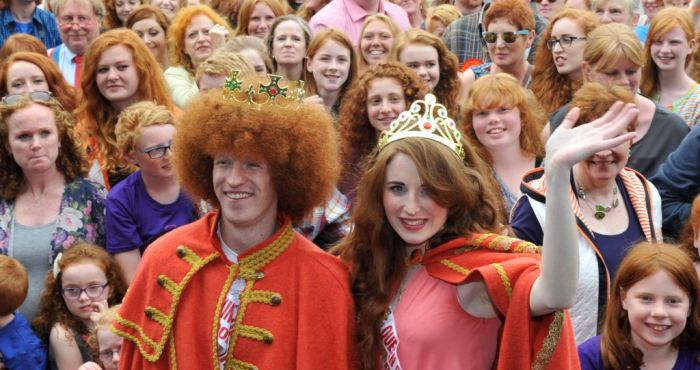 This Saturday, 12 January 2019, gingers across Ireland will gather in Phoenix Park – the largest enclosed park in Europe – in the Dublin capital city from 1-3pm to celebrate Kiss A Ginger Day.

The annual event encourages all those donning Celtic roots (quite literally) and foreign gingers to gather in solidarity and celebration.

The yearly celebration of redheads takes place worldwide and was established as an anti-bullying incentive to empower those with ginger hair and to discourage those quick to mock them.

Derek Forgie, a redheaded Canadian comedian, actor and activist founded Kiss A Ginger Day in 2009, making this year the decade milestone. Celebrations are set to be bigger than ever and, according to the public Facebook event page, Forgie will be flying into our capital for the big day.

The funnyman turned human rights and equality activist believes one should “making a positive difference on a daily basis”, according to his own Facebook profile. He also often dabbles in public speaking on the topics of diversity, acceptance and tolerance.

He was awarded the 2012 “Inspire Award” for Community Organization of the year for his educational presentations, demonstrations and discussions.

The event will run this Saturday afternoon and encourage those sharing red roots, friends, families and supporters of the ginger community to gather in Dublin’s Phoenix Park.

The concept of Kiss A Ginger Day is to celebrate the beauty of those sharing these rare genes. The idea is to give a kiss to a redhead – as a sign of appreciation – on the cheek or lips. With that being said though, you can’t exactly go around putting it on strangers without consent, so maybe a friendly acknowledgement would be a better fit.

This rare and recessive gene occurs in only 1-2% of the world’s population. It is most commonly attributed to those sharing a Celtic lineage and is seen in greatest abundance in Ireland and Scotland.

“Redhead” is a term which can cover a vast number of shades ranging from orange to copper and deep burgundy; it has been in use since 1510.

Redheads have got a tough time over the past few centuries, it is no lie. There are references as far back as Medieval literature which demonstrates the discrimination, and this prejudice has carried through to modern-day.

In fact, another reason Kiss A Ginger Day was established was to undo any negative preconceptions that the hit American animation series, South Park, may have had with its “Kick A Ginger Day”.

Lucky for gingers though, with a new wave of red carpet heartthrobs donning the Celtic look, redheads are finally getting the recognition they deserve. Celebrities such as Prince Harry, singer Ed Sheeran, actress Isla Fisher and model Lily Cole have finally changed the rules of the game, and natural fiery locks are on the up.

Paddy The Pintman is a sprightly 45-year-old County Kerry farmer. He is an only son lives alone...
Read more
Craic

Northern Ireland politician and Member of Parliament Ian Paisley Jr (54) has announced that because of the...
Read more
Craic