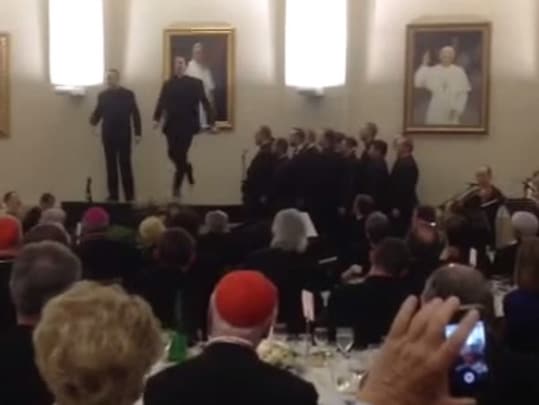 A video of two priests’ Irish dance battle made them an Internet sensation. Reverend David Rider (29) and Reverend John Gibson (28) became internet hits when they were filmed. It was caught on camera at a fundraising event at the North American College, an American seminary in Rome, near the Vatican.

The performance got ana amazing reception. However, some thought it wasn’t appropriate as one commenter said they should not have been dancing under a crucifix and a painting of Pope Francis I, calling it ‘disrespectful.’

You can watch the amazing video below:

A future tourist of the city or a local in search for entertainment? Why not…

‘If life is like a box of chocolates, it doesn’t last long’ confirms fat bastard

Eejits: the history, culture, and origins of eejits and where to find them