Is this the worst signposted junction EVER in Ireland?

A road junction in Ireland caused unusual traffic confusion at one of the country’s most chaotic junctions. It does not get more Irish than this.

The Rosslare Harbour junction in County Wexford is well-known for its lack of signposting.

If you have not heard of Rosslare Harbour, the village grew up to serve the needs of the harbour of the same name (now called Rosslare Europort), first developed in 1906 by the Great Western Railway and the Great Southern and Western Railway to accommodate steam ferry traffic between Great Britain and Ireland. This port also serves France and traffic is mainly roll-on roll-off (RoRo).

It is thought that harbour expansion and privatisation could improve exporting and logistical options for businesses and producers in Ireland offering an alternative to Dublin Port which dominates trade but relies on the UK corridor for much EU trade. Rosslare Harbour railway station opened on 30 August 1906.

Although the harbour itself is located close to the previously existing settlement of Ballygeary, and actually in the townland of Ballygillane Big, it was named after the village of Rosslare, some 4 km away (8 km by road) along the coast.

Today, the Harbour junction is notorious for its lack of signposting.

However, former art student Michael Fortune created an excellent video that shows off the comic side to such a failure. 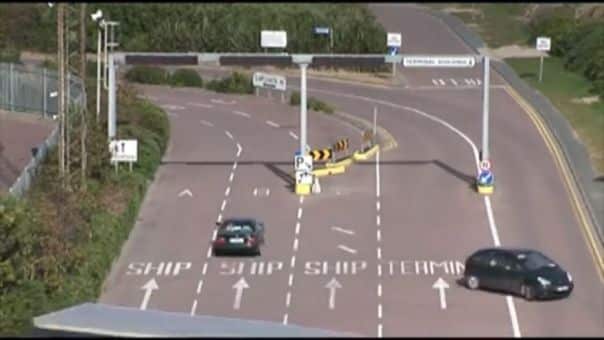 Over a relatively short period of three hours, Fortune filmed this short video as part of an art project but has only posted it on Facebook now after numerous requests.

The video has been viewed millions of times since. It just makes you wonder how much chaos this junction had over the years…

Pure and utter traffic confusion at one of the country’s most chaotic junctions… it just doesn’t get more Irish than this.

“I’ve been asked by a good few Wexford people to embed this on Facebook,” Fortune wrote.

“For those who haven’t seen it before, its a form of local folklore which I filmed in Rosslare Harbour in Co. Wexford in 2007.

“The short film captures the entrance to Rosslare port and how cars, vans, bikes etc swerve, dodge and dance at a badly signed junction.

“Apparently this had being going on for years. One man told me, that he’d go down most evenings during the summer, to observe the craic with the cars as they rushed to get onto the ferry.

“Aside from the cars going arseways, the man stopping to have a wee before he hit the queue for the ferry is 100% real,” he continued.

“I spent 3 hours recording this and once I stuck Valerio’s soundtrack underneath it that evening, I knew it was a winner.

“The man who brought my attention to this, Mike Kavanagh, passed away last year.”
Fortune joked: “I’ll never be let back into Rosslare again!”.

The Government has announced that an exclusion zone will be put in place around the midland county...
Read more