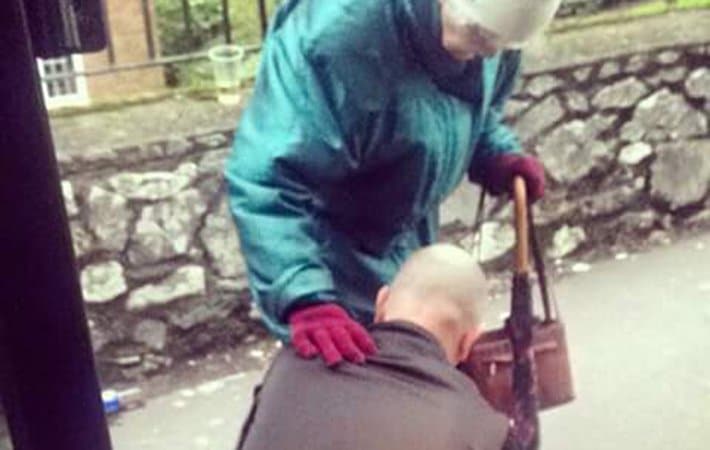 You’d only get this in Ireland! The amazing moment of kindness has gone viral.

An Irish bus driver made headlines worldwide for a simple act of kindness that went a very long way.

The Cork bus driver, stopped his bus to make sure that an elderly woman didn’t trip on her shoelace.

The driver, William Harris, was in control of the 205 bus in Cork City (from the Cork Institute of Technology to the city centre). It was on this route that he noticed an elderly lady getting off the bus with her shoelaces untied. As her arthritis was preventing her from doing it up herself Harris stepped out of the bus, got down on his knee, and gave her a helping hand.

The woman had bad arthritis which prevented her from doing it up herself, so Harris stepped out of the bus, bent down and gave the lady a helping hand.

Passenger Clara O’Brien spotted the moment and was on hand to take a photo and share it to the Bus Éireann Facebook page. Clara stated that the act of kindness “made my day.”

“I want to commend one of your bus drivers who was driving the 205 service from CIT to Kent Station at 15:40,” O’Brien wrote.

“As an elderly lady was getting off the bus she almost tripped. Once she was off, the driver noticed that her lace was undone and he stalled the bus to tell her. When she said that she knew, he realized that she wasn’t steady enough on her feet to bend down and tie it herself, so he got off the bus and tied it for her.

“He was so kind to her and went out of his way to look after a customer. I haven’t seen someone do something so kind in as long as I can remember and the lady was so appreciative she blew a kiss as the bus was pulling away. Your driver made my day.”